Associate Andrew Fordham and Principal Deborah Elliott were interviewed by Floor Focus Magazine for an article about Digital Design Tools.

Online design tools continue to evolve at a rapid pace. Designers use several third-party tools for rendering 3D models and designing project documents, along with social media for visualization purposes, as well as the design services offered by the bigger suppliers in the industry. Interior designers are uniquely combining these resources to accomplish their project visualization needs. Floor Focus reached out to four commercial interior designers across the country to find out what tools they utilize when designing a project, why they use them and what developments they would like to see in the next generation of design software.

While Autodesk has to some extent cornered the technology market when it comes to digital visualization tools, since it is considered by many the industry standard, the tools mentioned span a wide spectrum ranging from SketchUp and Autodesk’s Revit to hand-drawn sketches and social media. 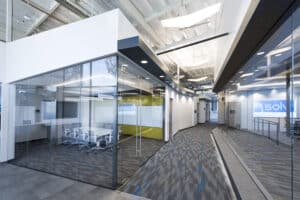 Versatility in software and photo-realism of project modeling play a huge role in the technology used by Deborah Elliot, president, and Andrew Fordham, senior designer, of ID Studios based in southern California. SketchUp Pro and Revit are the primary tools they use to create 3D models. However, the pros and cons of each, according to both Elliot and Fordham, have pushed software creators to introduce other tools, such as plug-ins like SU Podium that allow for photo-realistic rendering, as well as Photoshop for image enhancements.