The IIDA Haute Couture Fashion Show pays tribute to the many talents of our design community where San Diego’s esteemed design professionals strut their stuff down the runway outfitted in amazing garb constructed using only the materials provided to them by their sponsor and the fabric they collect at the Fabric Grab.

This year was a tribute to Album Art. Each firm selected an album and our team selected Nirvana‘s iconic album, Nevermind.

In the 90s, Nirvana established themselves as THE grunge band.  Their influence transcended music into fashion and pop culture.  The sound and style became iconic because of the dynamic contrast of quiet verses and heavy choruses partnered with their messy, dirty, plaid sweaters. Our design draws influence from the infamous cover of the Nevermind album and the swimming baby. 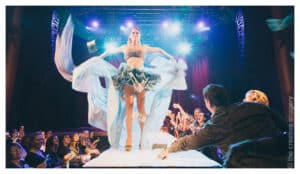 ID Studios has translated the image into a whimsical interpretation of an underwater fashion dream reminiscent of a wistful water nymph. The flowing fabric cascading from the model’s arms surrounds her with the ethereal nature of water while the simple style of her dress harkens the birthday suit worm by the child.

The materials that brought this concept to life include furniture hardware, mesh and gauzy textiles.

We were thrilled to win this year’s award for “Best Theme Inspiration”!

Thank you to our sponsor, Think Office Interiors and the team at ID Studios for working so hard to make this happen. Enjoy as Mary shows off our design.

You can see more pictures of the show HERE. 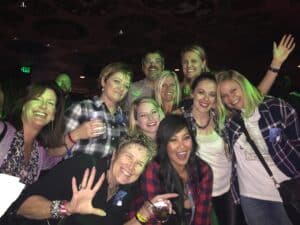