ID Studios Celebrates Halloween in Style as we dressed up and carved pumpkins. This year, one of the designers brought in ribbon and many people picked up on the Beauty Pageant Contestant theme. 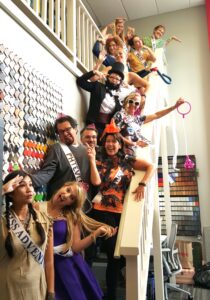 The pumpkin carving contest is a favorite. Teams were selected and pumpkins provided then the creative minds at ID Studios turned to their task of creating a memorable pumpkin in an hour. Here’s what they came up with:

From left to right: “Whale and her Calf” “Mummy” “Trumpkin” and, of course, a “Minion”.

The good people of TS Restaurants corporate office voted and picked Minions as the winner. Congrats to Steven and his team!